dotstudioPRO is a leader in video streaming technology 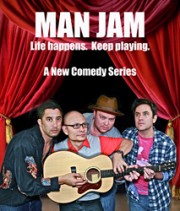 Film and television production company Westbrook Pictures, in collaboration with dotstudioPRO, a content distribution platform, is releasing Season one of "Man Jam," a comedy web series about a group of friends in their 30's who get together and play music to escape the rut of their humdrum lives.

“After several months of writing, shooting and post-production I’m really excited to get it out there for people to see. We’re all really happy about it,” says Matt Carmody, creator and producer. The series was self-financed by Carmody, also the director and writer of the first six episodes, after he came in 3rd place at The World Series of Poker. “I drove out to Vegas by myself to play in one of the tournaments. I figured I’d be knocked out in a couple of hours. Three days later I’m sitting at the final table. It was surreal.” With his winnings he formed Westbrook Pictures and began developing a range of projects, including a reality show pilot, several short films and feature scripts. “After years of acting it felt great to branch out into writing, producing and directing," said Carmody.

The idea for “Man Jam” grew from the old advice, “Write what you know”. Carmody and his real life friends and collaborators, Powell, Wade and Pascual, are also musicians and have a regular jam session at each other's houses. Says Carmody, “It’s the same as friends getting together to play cards -- you hang out, drink beer, talk about life. But in our case we’d play music instead of cards. Then one day I thought, ‘This is it. This is a show.’”

Carmody teamed up with writer Boyd Vico (“The Soup," “The Nerdist”) and knocked out twelve episodes. They shot the first six in just a few weeks. The format is in the current trend of web-series: bite-sized episodes. The longest “Man Jam” episode is just under five minutes.

The series has also partnered with Mr. Holland's Opus Foundation, a charity that supports music education by acquiring and distributing quality musical instruments to underserved children.

The next slate of episodes is scheduled to begin production in April. “Making your own project can be risky," says Carmody, “but in Hollywood, it helps to have a little gamble in you.”

dotstudioPRO is an online distribution platform that empowers creators to engage their audiences directly through owned and operated environments across multiple devices.